Atlantic City’s Taj Mahal was the source of a lot of attention when it was first built in 1990. In fact, current President Donald Trump—who was behind the project—called it the 8th wonder of the world when it opened. Sure, it survived for quite some time and did well for quite some time as well, but the doors on the once great casino have long been shut and gambling has been ceased for just as long.

Being that the Taj Mahal cost more than $1 billion to build, you might be shocked to learn that it was sold to Carl Icahn for a meager $50 million. Since the date of that sale, the future of the property had long been questioned, with some people thinking the property may remain vacant and unused forever. Then stepped in Hard Rock, who took over reigns of the operation and are set to open the casino’s doors in the Summer of 2018. 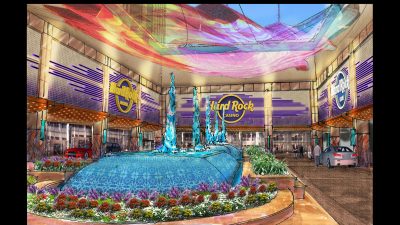 Matt Harness, who is the property president of the future Hard Rock Casino, said that there will be “no resemblance to what was there before.” This whole project is interesting because, despite the years’ worth of work that has gone into the property, Hard Rock does not have much of a presence in Atlantic City. At the sign unveiling, Harness and his partners did not discuss much about what future visitors can expect to see and experience at the future Hard Rock Atlantic City, instead leaving us and everyone else to wonder.

The Taj Mahal, which officially ceased operations back in 2016 despite it being a foregone conclusion long before that point, was a lavish casino with all the glitz and glamour you would expect to come from someone such as Donald Trump. Though few details were offered at the sign unveiling, it seems safe to assume that any sort of lavishness will be in Hard Rock’s classic rock n’ roll-centric theme.

Harness did speak at the unveiling, and he said, “We’re going to have the fun, relaxed vibe that we specialize in at all of our properties, but what you will see here will be like nothing else anyone has seen along the East Coast.” Rather than elephant statues and gold chariots, you can expect to see massive imagery of rockers and all sorts of priceless pieces of rock memorabilia. With Atlantic City now catering to a more middle-class gambling scene, this seems like a move that might suit Hard Rock International well.

In addition to the massive hotel, there are also going to be 2 renovated arenas and a casino floor that will feature more than 2,000 slot machines. As you might expect, there will also be a plethora of table games as well. By all accounts, this Hard Rock Atlantic City venture is looking like one that is getting a lot of people excited.