In the motor sports world, there are few events bigger nor more iconic than the Daytona 500, and for good reason. The origins of the modern day Daytona 500 can be traced back to a racetrack that first opened in 1902. The Daytona Beach Road Course hosted some of the earliest stock car races and paved the way for both the creation of Daytona International Speedway and the massive race named after it.

The 2018 installment will feature a major storyline that is the introduction of the new Chevrolet Camaro. The Camaro is a car loved by NASCAR racers and fans alike, but has never competed at the sport’s highest level. There is a lot of talk about how this new car will stand up to some of the more seasoned brands.

Another big storyline is the youthful faces on the storied, successful Hendrick Motorsports team. Alex Bowman (+2800), at just 24 years old, dominated the qualifying session this past weekend and will start the race from the pole position. For those new to NASCAR, the pole position is a coveted spot, but one that is notoriously tough to win from.

Joining Bowman in the field will be teammate Chase Elliott (+1200), who is just 22 years of age. He had a massively successful 2017 season and is looking to pick up where he left off; he will be starting in the 5th row. The Hendrick team does have a veteran in the form of Jimmie Johnson (+1400), and he will begin the race just one row behind Bowman. Johnson has won the Daytona 500 two times in his career, most recently in 2013. He may be nearly twice the age of his aforementioned teammates, but has is still considered by some to have a decent chance of getting a third Daytona victory under his belt.

Keselowski may have not even cracked the top 20 in the 2017 Daytona 500, but he is the odds on favorite to end up in Victory Lane this time around. Thanks to the retirement of Dale Earnhardt Jr., Keselowski is now considered to be the dominant force in the Monster Energy NASCAR Cup Series. He posted 3 wins and 15 top-5 finishes last year, which was good enough for 4th in the final standings. A major part of the reasoning behind Brad being the favorite is that fact that he was able to emerge victorious in last weekend’s The Clash, a 75-lap race between 17 pole winners from last season. Keselowski will start the race from the 10th row on Sunday. 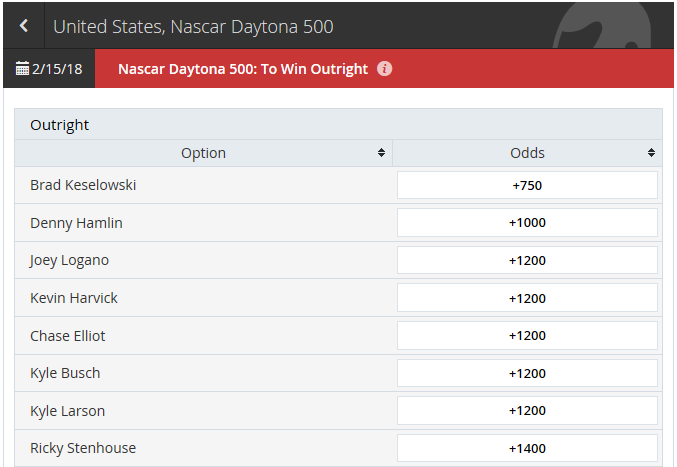 Denny Hamlin was the second-fastest car in qualifying and will start the race with no one in his way. The 37-year old managed to secure a 17th place finish in last year’s Daytona 500 and won a total of 2 races last season. One thing to note about his wins, however, is that they came at Darlington and New Hampshire, which are two of the shorter tracks on the Monster Energy NASCAR Cup Series, both less than 1.5 miles. Daytona, which is a whopping 2.5 miles in length, will present Hamlin with a challenge as he attempts to hold off a field that also wants to get their season off to a positive start.

Joey Logano is the youngest of the 3 favorites and will find himself starting the Daytona 500 in the 6th row. He may have finished behind both Hamlin and Keselowski as far as the final standings are concerned, but Logano recorded a 6th place finish in last year’s Daytona 500. What’s more, he followed that finish up with 6th and 4th place results the next 2 consecutive weeks. With all of that being said, Logano finished near the end of the pack the second time NASCAR visited Daytona last year, so it will be intriguing to see which performance he replicates come Sunday. The feeling is that Logano will bounce back from the admittedly sub-par year he had in 2017, and what better place to start than at Daytona?

As you might expect, the most popular bet type on the 2018 Daytona 500 is with regard to the outright winner of the race. Without going into much more detail, a wager on the outright winner means that you are betting that one specific driver will finish the race in first place. This is a straightforward bet, however one that is not so easy to predict seeing as this is a 500 mile race with multiple hundreds of laps.

Another type of wager is one relating to a top 3 finish. This type of wager will look the same as an outright bet, however you are betting on a driver to finish in any one of the top three positions by the time the race has come to an end. Statistics will tell you that you have a stronger likelihood of picking this one correctly, and the odds reflect that.

Head to head racing is a fun way to stay in the betting action during the long race that is the Daytona 500. For example, you can bet that Kyle Larson will beat Kevin Harvick in the race. The odds may show Larson -115 and Harvick +115 if they are even, or -130 and EVEN if Larson is a favorite. You are betting on one driver to finish higher than another. Each sportsbook will offer different matchups in head to head betting, and there is usually a bit more vig added to these Daytona 500 wagers.