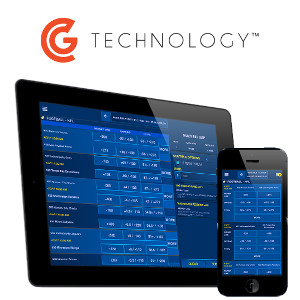 In addition to providing technology solutions, CG is a preeminent operator of the CG racebook and sportsbook in Nevada, and also a provider of gaming and wagering services to other land-based casinos, amongst other things. Its headquarters are in Las Vegas, Nevada, and the company has continued to grow and expand into new global markets in response to partner demand for its gaming and manufacturing licenses and superior technology solutions.
The company is an affiliate of New York-based financial services from Cantor Fitzgerald L.P. CG Technology is the first company to be licensed by the Nevada Gaming Commission to manufacture, distribute, and operate a mobile gaming system in the state.

Cantor Gaming arrived on the gambling scene is 2009, settling in Las Vegas with Lee M. Amaitis as its Chief Executive Officer (CEO). Since its inception, the company has witnessed a tremendous growth and is one of the world’s leaders in mobile casino gaming technology, racebook and sportsbook technology products and services. It is Nevada’s largest sportsbook operator and was the first company licensed by state regulators, the Nevada Gaming Commission, to manufacture and operate a mobile gambling system.
As of 2014, the company estimated that it had more than 30% of the Nevada sports wagering business and processed over 50% of technology-based wagers, and it had plans to seek a public offering in the future. In January 2014, the company announced that it was changing its name to CG Technology.

On January 6, 2014, Cantor Gaming announced that it was changing its name to CG Technology (CGT) to better accentuate the company’s position as a technology firm offering mobile casino gaming, racebook and sportsbook products and services. The company said that the new identity will represent its commitment to develop and deliver best-in-class technology products and services for the gaming industry.
CG Technology provides networks, systems, operations management services, system licensing, and hardware and software design and development. In addition, the company develops casino games with web hosting platforms for casinos.
Outside the United States, CG Technology has licensed its sophisticated mobile gaming and racebook and sports pool systems, as well as risk management consulting services to Atlantis, Paradise Island in the Bahamas. The company also has an agreement with Celebrity Cruises, to offer its innovative mobile gaming technology on a selection of high-end Celebrity Cruise ships, making it the first time the cruise industry has offered its customers a mobile casino gaming application.

In 2016, CG Technology agreed to pay $22.5 million to US authorities to settle charges of illegal gambling and money laundering. The fine will release the bookmaker, which operates sportsbooks in Las Vegas at The Venetian, Palms, Hard Rock Hotel, Tropicana, and others, from liability for prosecution. CG Technology admitted to violating federal laws, and duly cooperated with authorities to take steps towards reforming its business and compliance operations.
The company was accused by federal prosecutors in Brooklyn, of allowing its high rollers to make wagers through proxies, a practice known as “messenger betting”, which violates Nevada state law. Of the total fine, $16.5 million will settle investigations by US attorneys in Brooklyn and Nevada, while $6 million will allow CGT to avoid prosecution by the Financial Crimes Investigation Network (FINCEN).
From 2009 – 2013, Michael Colbert, former Vice President of race and sports risk management at CG Technology (known as Cantor Gaming at the time) along with his staff, facilitated illegal conducts, including allowing the use of “runners” to place bets for third-parties in exchange for compensation. They processed large cash deposits, withdrawals, and third-party transfers while knowing the funds represented illegal proceeds. According to prosecutors, they also allowed at least two high rollers, who ran illegal bookmaking operations, to launder money through the company.
In 2012, Colbert was arrested for being part of an illegal betting ring known as the “Jersey Boys”. He pleaded guilty three years ago, in 2009, to conspiring to take part in illegal gambling and could face up to five years in prison.

Apart from the crimes committed by the company through Colbert and his staff, the company was also forced to pay $1.5 million to the Nevada Gaming Commission over claims that it knowingly shortchanged customers at casino sportsbook in Las Vegas for over $700,000. The company was aware that a glitch in its bookmaking software solution had been underpaying thousands of customers on “round robin” parlay bets but failed to rectify the issue. The Nevada regulator discovered that between early 2012 and mid-2015, customers were underpaid on more than 20,000 separate occasions.
On August 31, 2016, Lee Amaitis, CEO of CG Technology, was forced to resign under the terms of the settlement with the Nevada Gaming Commission. Commission Chairman, Tony Alamo, called for a culture change and a necessary reboot within the company. Earlier on, the commission had recommended that the company’s gambling license be revoked.