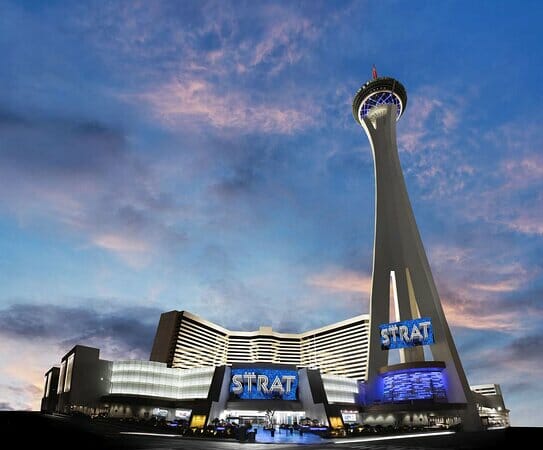 If you visit the Stratosphere you will immediately notice the iconic observation tower that dwarfs the hotel and casino. The freestanding observation tower is 1,149 ft and is the tallest freestanding observation tower in the United States. It is the second-tallest tower in the Western Hemisphere as only the CN Tower in Toronto, ON is taller.
The Stratosphere traces its roots back to 1974 when Bob Stupak first opened Bob Stupak’s World Famous Million-Dollar Historic Gambling Museum and Casino. However, it was short-lived as the casino burned down two months after it opened, thus Stupak’s made plans to build another casino. In 1979, he opened the Stratosphere, which was known as the Vegas World hotel at the time.
In 1993, Grand Casinos purchased shares in Stupak’s company and announced plans to integrate Vegas World into the Stratosphere resort. By 1996, integration and construction was finished but the company filed for bankruptcy. Today, the casino, hotel, and tower are owned by Golden Entertainment. In March 2018, Golden Entertainment announced plans to invest $140 million to renovate the Stratosphere and plans to complete the renovation project in three phases.
If you plan to visit Stratosphere you will be pleased to know that they offer free valet parking and also have plenty self-parking options as well. And if you are staying the night The Stratosphere Casino, Hotel & Tower charges a $32.99 daily resort fee plus tax. The fee includes admission to the observation tower for only $5 per person Monday through Thursday and $10 per person Friday through Sunday. Just make sure you bring your room key to take advantage of the guest rates.

[table]
As we previously indicated the Golden Entertainment company is the owner of Stratosphere (as of 2017) and they already have announced plans for major changes. So if you have visited the casino lately you can expect that within the next five years things may drastically change.
With that said, during our visit, we found that the casino is very much middle of the road. It is not a high-end casino, but certainly not terrible. Usually, you will find a good mix of locals and tourists.
The casino game selection is about average. You will find table games such as Baccarat, Big Six Wheel, Blackjack, Craps, High Card Flush, Pai Gow Poker, Roulette, and a few others. In terms of gaming machines, you will find a good amount of video poker machines. However, there are some slot games as well, most of which are outdated. The slot machines have fairly high limits, but the Strat doesn’t attract high limit slot players.
In general, the casino floor is average at best. There are definitely worse options in Las Vegas, but with pending renovations, we are hopeful that this historic casino property may overcome some of its shortcomings and improve its gaming selection.

In the past when we have visited we did not see any baccarat tables running, however, we were pleased to see that the Stratosphere is now offering baccarat games.

The perennial favorite of blackjack is available on the casino floor at Stratosphere. You can find tables with betting minimums of $5 or $10. The majority of the tables were six-deck games and pay 6:5. You may be able to find double-deck games with $25 minimums too, but overall blackjack at the Strat is mediocre. It is worth noting that they also offer double twist blackjack.

The odds for craps at Stratosphere is 10x, with minimums as low as $5. They also have crapless craps too. Crapless craps is probably a worse bet than playing regular craps but you will still probably see people at the tables.

There are double zero roulette tables at Stratosphere.

Other Table Games at Stratosphere

There is no high limit room at Stratosphere.

The 80,000 square foot casino floor at Stratosphere is home to several slot and video poker gaming machines. You will find traditional reel slots and modern slots with denominations starting as low as $0.01. There are also reel-spinning progressives.

Stratosphere offers high limit slot games, with denominations as high as $25. However, as we previously indicated above the Strat is not known for attracting high limit slot players.

You will find four different video poker games at the Stratosphere, with the highest payback at 98.49%. Denominations start at $0.25 and go as high as $10 in the high limit area.

Open from 11am to 3am daily, the Strat’s poker room has ten poker tables. It is its own separate room located on the main casino floor.

The Stratosphere also has a sportsbook on the casino floor. But much like the casino as a whole, the sportsbook is very average. The betting board is hard to see as it is behind the cashier and out of the main TV section’s way.
It can get very smokey from the smokers playing on the casino floor so we wouldn’t recommend hanging out to watch a game if smoke bothers you. In general, the seating is actually comfortable but due the location and viewing are not ideal. Therefore, if you are going to sports bet at Stratosphere we recommend placing your sports bets and heading somewhere else to watch the game or enjoy a meal.

Below are the current room options available to book at the Stratosphere.
– Standard North Tower King
– Standard North Tower Two Queens
– Deluxe Central Tower King
– Deluxe Central Two Queens
– Stratosphere Select King
– Stratosphere Select Two Queens
– Elite North Tower King
– Elite North Tower Two Queens
– Elite Central Tower King
– Elite Central Tower Two Queens
– Classic Grand Suite
– Boulevard Suite
– Tower Suite
The hotel at the Strat is 24 stories and consists of 2,429 rooms. As mentioned earlier, the resort fee is $32.99 daily resort fee plus tax per night. The fee includes discounted admission rates to the observation tower, 24-hour fitness center, WiFi, admission to both of the hotel’s pools, and more. Check-in starts at 3pm and you will need to check-out by 11pm.
Room prices are fairly reasonable, and obviously, increase if you wish to book a room with more amenities. You can expect to pay $100 to $165 per night (excluding fees) for the standard, deluxe, and select rooms. The elite rooms are about the same in price but may be higher depending if they are running any specials or what the hotel’s availability is.
The suites at Stratosphere are also fairly reasonable as they typically are between $195 and $295 per night. Suites include a wet bar, separate dining area, and a separate seating area among several other amenities.
There are also two pools at the Strat. The Elation Pool is a 15,000 square foot resort-style pool located on the eighth floor with cabanas, a bar, and more. The RADIUS Rooftop Pool & Wet Lounge is an adult-only pool located on the 25th floor, offering great panoramic views of Las Vegas.

Spa and Fitness Center at Stratosphere

The Stratosphere is home to the Roni Josef International Salon Spa. Here you can enjoy a relaxing massage, facials, haircuts, and various spa treatment packages. The pricing for the services is about average, with nothing standing out as too expensive.
There is also a fitness center located on the retail level of the property. If you are a guest of the hotel, access to the fitness center is included in your daily resort fee.

There is no shortage of dining options at Stratosphere. By far the marquee option is their award-winning fine dining restaurant, Top of the World. It is located at the top of the tower, yielding incredible views of Las Vegas.
Other food and drink options include McCall’s, 107 Sky Lounge, Fellini’s, Roxy’s Diner, Crafted Buffet, C Bar, Air Bar, Nunzio’s Pizzeria, Sin City Hops, Margarita Bay, Tower Creamery, and on-the-go favorites such as McDonald’s and Starbucks.
McCall’s is another fine dining restaurant that offers steak and seafood, while Fellini’s offers fine dining Italian cuisine. There are also plenty of other options that are a little easier on your wallet, such as Roxy’s Diner and Nunzio’s Pizzeria. Food is also available at both of the pools at the Strat.
Furthermore, you also may be able to enjoy some live entertainment at some of the bars inside the Strat. Sin City Hops and 107 Sky Lounge sometimes have live music. Also, there is a comedy club in the Tower Shops, but it is not directly correlated with any of the bars or restaurants.