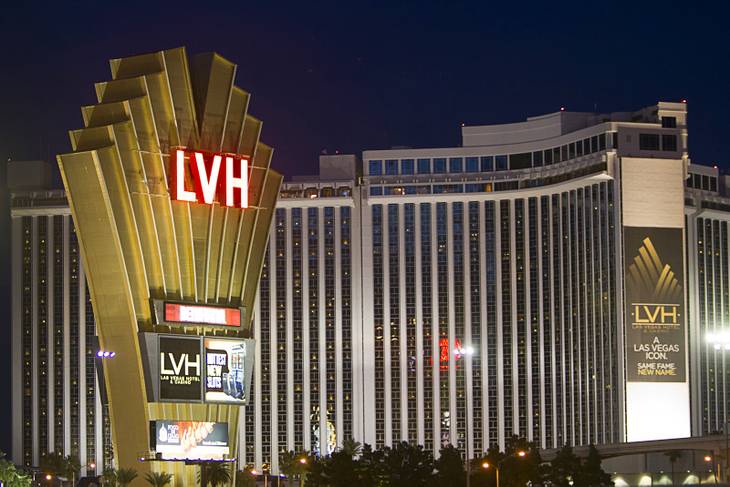 Las Vegas Hotel and Casino, known as LVH, is the former Las Vegas Hilton. It was operated by Colony Capital, the same group that managed the former Atlantic City Hilton. The group lost Hilton franchise rights at both properties. The Las Vegas property became LVH. The Atlantic City resort became ACH before it was rebranded as Atlantic Club. That property fell into bankruptcy and folded in January 2014. The LVH was lost to creditors in 2012.
The Las Vegas Hotel and Casino have since changed names again, but for the purpose of documenting the history of Las Vegas, we’re leaving this review up as is. We will be adding a new one for it, which is now known as the “Westgate Las Vegas Resort & Casino.”
The former Las Vegas Hilton ran into the same fate. It fell into foreclosure and went to auction. The buyer was a partnership formed by Goldman Sachs and Gramercy Capital. Goldman Sachs manages the fund that owns the Stratosphere and two other Las Vegas casinos.

The LVH is best known for its world class sports book. It is managed by Jay Kornegay; one of the most popular sports book managers in Las Vegas. The LVH sports book offers some of the best sports betting odds in Las Vegas. Baseball sides are always dime lines and there are special reduced juice days during football season. In addition to this, futures bets offer the lowest vig in town.
The sports book is so massive that it is split into two separate sections. There is a smoking and non-smoking area. There is also the Ultimate Fan Cave that is entirely non-smoking. There are dozens of large televisions spread across each of the sports books.
The LVH sports book has a very liberal drink policy. If you have a ticket on a current sporting event or race then the waitresses will be happy to supply free drinks. The amount of the bet is not considered when comping drinks, so you can bet very little and still receive free drinks.

Aside from the sports book, there is also a five-table poker room at LVH. Its main game is 1/3 No limit Texas Hold’em, however the LVH poker room does not spread any poker tournaments.

The table game selection at LVH is decent, especially considering its size. Players should be careful about blackjack however. Most of the shoe games pay 6-5 on a natural. These types of tables start with a $5 minimum bet, while the $10 tables generally pay 3-2 on blackjack. All shoe games use a continuous shuffle machine and the max bet in shoe games is $1,000. There is double deck blackjack that starts at $25 per hand with a $2,000 max bet. This game also pays 3-2 on a blackjack.

Roulette, Craps and Other Games

There are two roulette tables with double zeros. The bet range is $5 to $1,000. Craps has the same limits with 3-4-5 odds. Three Card Poker and Casino War are available with $5-$200 bet limits.
There is an Asian games pit with baccarat and Pai Gow Poker. Baccarat is available with $25-$2,000 limits. Pai Gow Poker has $10-$2,000 limits.
Video poker at LVH is some of the best in Las Vegas. Full-pay Jacks or Better is available thought the casino floor. There is also Deuces Wild that returns over 100 percent and a great Joker Poker game. Some nickel machines even spread these games. If you are an avid video poker player, you’ll know that is extremely rare in Las Vegas.

Rooms start at right around $25 per night during the week and $69 on weekends at LVH. With that said, high volume weekends and convention times will see those rates skyrocket. The LVH hotel is within walking distance to the Las Vegas Convention Center. This makes it a popular choice for conventioneers.
The lowest rated rooms are the Classic ones. The Premium, Superior and Grand rooms are about $15 more per night. Junior suites are about triple the base rate. The Napa and Park Avenue suites start at about $900 per night during the week and into the thousands on weekends. There is also an $18 per night resort fee.

Casual dining choices include the LVH buffet, Burger Bistro, 888 Noodle Bar, Vince Neil’s Tatuado Restaurant & Cantina and the Paradise Café. There is also a deli in the sports book and a Pizza Hut near the north entrance. The Paradise Café is the only 24-hour dining option.

The Tempo Lounge is the LVH main entertainment bar. It is a small lounge and dance club atmosphere. There are three casino bars located throughout the property, including one at the sports book.

LVH is located on Paradise Road just east of the Strip. It is located right behind Riviera. It is accessible by the Las Vegas Monorail, making it easy to get around the city.
One of the major draws of the LVH is that it offers a huge convention center. It is also within walking distance of the main Las Vegas Convention Center. Shimmer Cabaret is an intimate theater where small acts perform. The LVH Theater hosts 1,700 seats. Shows at the LVH Theater include Raiding the Rock Vault and Trent Carlini.