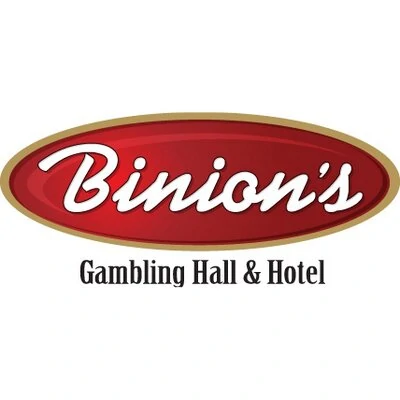 $1,000 Welcome Bonus Plus Other Offers

Binion’s Gambling Hall is located in Downtown Las Vegas directly on the Fremont Street Experience. The casino is next to the Fremont Hotel & Casino and across the street from both the Golden Gate Casino Hotel and the Golden Nugget Las Vegas.

The casino is named after Benny Binion, whose family owned and operated the casino from 1951 (the year it was founded) until 2004. From 2004 to 2008 Binion’s was owned by MTR Gaming Group. From this transaction, Binion’s also lost the Horseshoe brand name. Today, it is owned by TLC Casino Enterprises the same company who owns nearby Four Queens.
Initially, upon purchasing the property, TLC planned to expand the hotel at Binion’s but ended up closing the hotel entirely during the economic recession in December 2009.
There is no valet parking at Binion’s. There is a self-park garage off Casino Center Boulevard, between Fremont Street and Ogden Avenue. If you actively game or dine at Binion’s the first three hours in the parking garage are free with validation. It might be difficult to flag down the appropriate person inside but just know that you are entitled to validation. Otherwise, the cost is $2 per half hour for up to three hours and then $1 for each additional half hour.

[table]
When you walk into the casino at Binion’s you will immediately realize how old this property is. The look and feel inside is outdated and if we are being blunt management over the years has not taken good care of the property and it has gone downhill over time. However, the floor itself is fairly large at least in comparison to other casinos downtown.
The games on the floor are not the best either. You can find Blackjack, Craps, Pai Gow Poker, Roulette, and Three Card Poker. There are also various video and classic-reel slots on their floor.

Baccarat is not offered at Binion’s.

It is best to avoid playing blackjack at Binion’s as it is one of the worst options in Las Vegas. There are zero 3:2 tables but you can find minimums as low as $5. They also offer Super 4 and free bet blackjack.

The craps tables at Binion’s are average at best. Also, the dealers are not the best, yet the tables are usually pretty crowded as Binion’s is located just off Fremont Street. The odds are 5x and the minimum wager requirement is $5.

Double zero roulette is available on the casino floor at Binion’s.

Other Table Games at Binion’s

Despite being a large casino floor the table game selection at Binion’s is not the greatest. Below is a list of additional table games available.
– Big Six Wheel
– High Card Flush
– Let It Ride
– Pai Gow Poker
– Three Card Poker

Unfortunately, there is no high limit area for table games at Binion’s.

Binion’s offers over 800 gaming machines on their casino floor. You can find popular titles such as Jurassic Park, Wonder Woman, and Family Guy. Also, Binion’s has Club Binion’s where members can earn cash back and comps by playing any one of their slot machines.

Binion’s does not offer a high limit area for slots.

Video poker at Binion’s is about average as there are a few good games with reasonable pay tables (99.20% was the highest we saw). There are six games to choose from including Loose Deuces Wild, Double Bonus, Double Double Bonus, and Jacks or Better. Denominations start as low as $0.05 and go up to $1.

Binion’s has a small poker room that was once home to the World Series of Poker but the rights were sold to Harrah’s (now Caesars Entertainment) in 2004. Nevertheless, the poker room is active and has $4 rake on all cash games and $2 in comps per hour of rated live poker play.

The sportsbook at Binion’s is run by William Hill so, therefore, the lines will be the same as any other William Hill run sportsbook. Overall, the sportsbook is about average or just below. It’s fairly basic and offers the bare minimum.
There is no sign pointing you in the direction of the book so it might be difficult to see but it is adjacent to the poker room on the casino floor.
Despite being small it is spacious. The betting boards are on small TVs behind the cashiers. One thing to note is that horse racing is unavailable. Otherwise, it gets the job done in terms of serving as a place to bet on sports. But don’t expect any fancy add-ons.

Though the hotel rooms and the building itself is still intact, Binion’s does not have an active hotel onsite. The 366 room hotel officially closed in 2009.

Spa and Fitness Center at Binion’s

Since there is no active hotel you shouldn’t be surprised that there is no fitness center or spa available at Binion’s.

When it comes to dining choices at Binion’s the marquee option is the Top of Binion’s Steakhouse. Located on the 24th floor it offers phenomenal views of Las Vegas and a romantic atmosphere. The menu is essentially one you would find at any traditional steakhouse and they are open from 5pm to 10pm daily.
Other food and beverage options at Binion’s include Benny’s Smokin’ BBQ & Brews, Binion’s Cafe, Binion’s Deli, Cowgirl Up Cantina, and Whiskey Licker. Benny’s is a good choice if you are in the mood for barbecue and brisket in particular. While the deli and cafe both provide a diverse menu for breakfast, lunch, and dinner. The Whiskey Licker is an outdoor bar that allows you to take in the sights and sounds of the Fremont Street Experience.