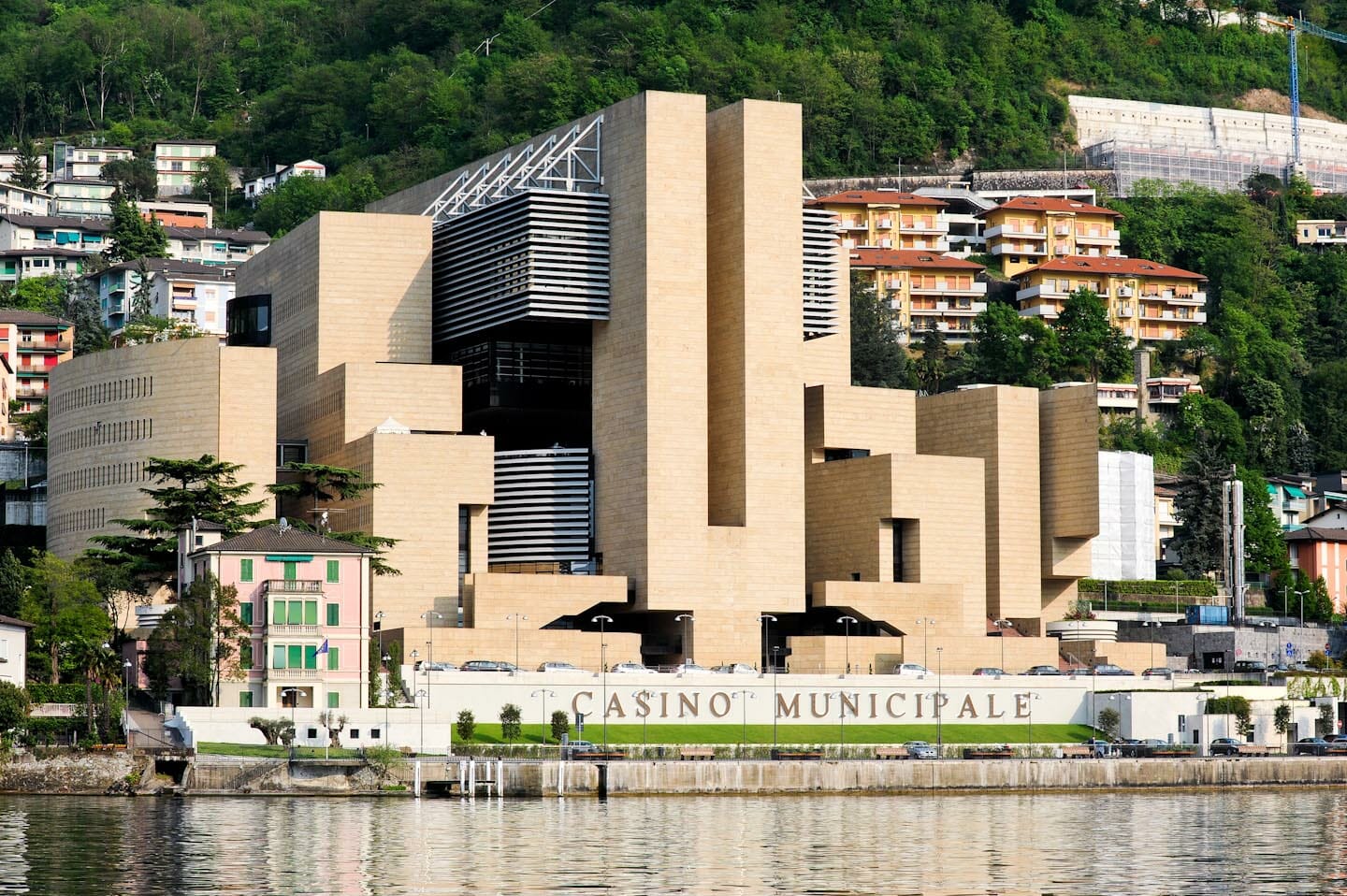 Casinò Municipale di Campione d’Italia is open from 12 PM every day except on Sunday when it opens an hour earlier at 11 AM, while it closes at 4 AM during the week and 5 AM on weekends. As an extremely large casino measuring just under 600,000 square feet, you can expect to find a vast amount of table games, slot machines and electronic gaming terminals to enjoy when visiting.
The décor both inside and out at Casinò Municipale di Campione d’Italia is extremely luxurious, so it is not a surprise that major poker tours regularly use this casino to host big events. The players you will find here are a mix of tourists from all over Europe and Italy itself and this usually leads to a light-hearted yet dignified atmosphere on the casino floor.

A massive selection of table games can be found at Casinò Municipale di Campione d’Italia. They are spread across 56 tables; more than you might find at many other casinos in Italy. Of course, you will be able to play blackjack and many roulette variations, but there are a vast number other table games available.
Other tables feature games such as punto banco (baccarat), craps, Caribbean Stud Poker, Russian Poker, Texas Hold’Em, Ultimate Texas Hold’Em and French games like Chemin de Fer and Trente-Quarantine. Many of these games may not be known by some guests, but if you ask the dealers or other players at the table, you will certainly be able to learn the rules.
Casinò Municipale di Campione d’Italia is also a popular casino for poker players of all levels from amateurs to professionals. The Italian Poker Open which is sponsored by PokerStars regularly holds events here and during the weekends there are tournaments held at 3 PM, 8 PM and 9 PM that can accommodate as many as 25 players each. Buy-ins for these tournaments range from €50-€250.
Cash games of Texas Hold’em poker are also held daily starting at 3 PM until the casino closes. There are numerous tables that generally hold 10 players each and the minimum buy-ins will range from €100 to €500 with blinds ranging from €1/€2, €2/€5 and €5/€10.

With 778 electronic gaming machines on the main gaming floor at Casinò Municipale di Campione d’Italia, you are never going to be short of options. This number includes 140 slot machines that are located in a separate room for smokers. You will be able to find video slots, video poker machines, multi-game machines, horse racing terminals, progressive jackpot slots and even electronic roulette terminals that can seat multiple players.
Novomatic and other leading casino game developers are behind the electronic machines at the Casinò Municipale di Campione d’Italia and they claim that more than €1 million a day are won from their large range of gaming machines. The progressive jackpots will be responsible for many of those big wins as these is a network of slot machines that contribute to a shared jackpot which can grow to extremely large amounts.
Minimum bets of €0.01 can be found on many of the gaming machines at the Casinò Municipale di Campione d’Italia but you will be able to bet as high as €500 per spin on some of the more advanced machines.

While you will not find any accommodation at the Casinò Municipale di Campione d’Italia itself, you will find an assortment of them located in close proximity. Just a few yards away from the casino is the Melia Campione, while a little further out there is the Hotel Admiral, The View Lugano and the Hotel Atlantico.

There is both a restaurant and a snack bar available for any players that need to grab a bite to eat when enjoying a night at Casinò Municipale di Campione d’Italia. The Seven Restaurant seats up to 200 people and will serve a wide range of delicious dishes such as Italian and popular international cuisine. If you are after something a little quicker the snack bar in the casino will be able to provide you with some light meals, snacks and sandwiches.