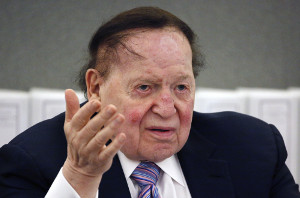 Sheldon Adelson is the quintessential representation of many American business tycoons; a veritable ‘rags to riches story.’ He is one of the most recognizable figures in the American business landscape with a career that has spanned more than six decades. A leading figure in the casino resort business that has come to define the Las Vegas strip, Adelson has been able to make a name for himself in the business.
Sheldon Adelson is the chairman and chief executive officer of the Las Vegas Sands Corporation which is the largest casino company in the United States. He is also deeply involved in politics, as a member of the Republican party and has made significant campaign donations to Republican Presidential candidates including current U.S. President.

Sheldon Adelson was born on August 4, 1933. His middle name is Gary and he was born to immigrant parents in the Dorchester area of Boston, Massachusetts. His father, Arthur Adelson was of Ukrainian-Jewish and Lithuanian-Jewish ancestry. His mother Sarah Adelson (née Tonkin) was of Welsh ancestry. His parents were struggling low-income earners, his father was a cab driver and his mother was a seamstress who owned a small knitting shop in the neighborhood.

Having already began a couple of small business activities while as a teenager, he decided to attend trade school, with the dream of becoming a court reporter. He later joined the army before attending the City College of New York to study Corporate Finance. He would, however, drop out of college, less than two years later to pursue a career in business and entrepreneurship. Adelson has always considered himself to be a risk taker, which is one of the reasons that informed his decision to quit school and become a full-time businessman.

Long before achieving success in the business world and becoming and multi-billionaire business tycoon, Adelson rose from humble beginnings. It all began for him when he was still a young boy, obtaining a few hundred dollars loan from his uncle. He used this first loan to obtain a license to sell newspapers in Boston. He got the idea from his taxicab driving father who also sold advertisements.

The success of the business enabled the then 16-year old Adelson to take another loan from his uncle. This time, the loan was about $10,000 (which is over $100,000 today when adjusted for inflation). He used to loan to establish a candy-vending machine business. Even early on in his business career, Adelson was already showing a knack for entrepreneurship and spreading his tentacles wide.

Upon his discharge from the army, he established a business that specialized in the sales of chemical spray for cleaning frozen windshields. He named the business “De-Ice-It” and by the 1960s, he had added a tour business called the American International Travel Service to his catalog of enterprises. Now in his 30s, Adelson had become a millionaire. During this time, he had lost and recouped his fortune twice. The stock market decline of the latter part of the 1960s severely affected his businesses. The desire to bounce back after a loss is something that would go on to define Adelson’s business career.

Adelson began to recover from the late 1960s stock market collapse by getting into the real estate business in the early 1970s. He got into the real estate brokerage business scene in Boston and was doing well, providing condominium conversions. The condo market eventually tanked and Adelson struggled to find another business to get into. He then acquired a publishing company and that was when he got interested in computers. A short while later, Adelson attended a trade convention for condos and got the idea to hold a similar trade show for computers.

Adelson’s first computer trade show in 1973 was a modest success but he saw the potential in the business as so he sold his other business ventures and put all he had in the trade show business. He established a new company called the Interface Group with a sole focus on organizing computer trade shows. The company made a quarter of a million dollars in its first year.

By 1979, Adelson had created the Computer Dealers Expo (COMDEX) and the first show was held at the MGM Grand in Las Vegas, Nevada. COMDEX began at a time when the PC industry was beginning to bloom with notable brands like IBM, Apple, and Microsoft establishing themselves in the market. COMDEX took advantage of the buzz and presented a platform for these companies to exhibit their latest technological breakthroughs.

In less than a decade, COMDEX has grossed more than $20 million becoming the largest trade show in Las Vegas. By 1995, Adelson had sold his stake in the Interface Group to Softbank Corporation, Japan, for $862 million.

Today, Adelson is known for being one of the pioneers of the casino resort business. It all began in 1988 when he acquired the Sands Hotel and Casino in Las Vegas for $128 million. He remodeled the hotel and built a mall as well a convention center for COMDEX. In 1991, he got the idea to build a mega-resort and so he razed the sands and built the Venetian, a resort and casino that encapsulated the Italian city of Venice. The construction of the Venetian cost about $1.5 billion as was opened for business in May 1999.

By 2003, Adelson added the Venezia tower which increased the number of suites in the Venetian to 4,049. The Venetian also has 18 restaurants, canals, gondolas, and a shopping mall.

Following on from the success of the Venetian, Adelson decided to build another Sands casino resort in Bethlehem Pennsylvania. The casino began operations in May 2009 with table games beginning in July 2010. The hotel was opened for business a year later. Adelson also took his casino resort business to locations outside the United States.

Adelson has a casino resort in both Macau and Singapore. The Sands Macao was opened in May 2004 to great success as Adelson recovered his initial investment of $265 million in barely a year. In fact, such has been the scale of the success of the Sands Macao that Adelson’s wealth has grown by almost 1,500% since it was opened.

In 2010, Adelson opened the Marina Bay Sands in Singapore which reportedly cost $5.5 billion to construct making the third-most expensive building in the world. the resort contains a convention center, nightclubs, and 2,500 luxury suites.

Sheldon Adelson is a fierce opponent of marijuana legalization. Mitchell, Adelson’s son, died of a drug overdose having been addicted to cocaine and heroin. Adelson views marijuana as a gateway drug and has committed considerable funds to fighting the efforts to legalize it.

Adelson admits to being raised in Democrat household. According to him, his family identified with the Democratic party in the 30s and 40s due to their shared goals of accountability and support for the Jewish nation. However, as Adelson grew up, his political affiliations changed and he has since become a Republican. Over the years, he has contributed to the political campaigns of numerous Republican presidential candidates.

Adelson married his first wife, Sandra in 1974, and they adopted three children; Mitchell, Gary, and Shelley. The couple divorced in 1988. Adelson then met his second wife, Miriam, on a blind date in 1989 before the couple married in 1991.