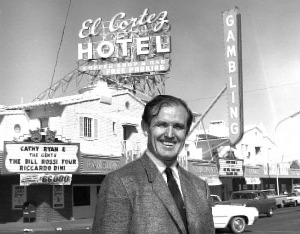 Jackie Gaughan was a casino owner/operator commonly referred to as the “King of Downtown Vegas”, and he was considered a legend in the gaming industry. In a career that spanned over half a century, Jackie was known to be generous, considerate, and exuded humility that was charming. He also had an ownership stake in many casinos throughout his career but was widely recognized for his ownership of El Cortez, where he lived until he passed away in 2014.

Jackie Gaughan was born John Davis Gaughan on October 24, 1920, in Hastings Nebraska. His father was a legal horse race bookmaker and worked at the Chez Paree Casino in Carter Lake, Iowa. Jackie grew up in Omaha, Nebraska. While he was a senior at Creighton University during World War II, he was drafted into the Army Corps and was assigned to Tonopah, Nevada, in 1943. He was later assigned to serve as Las Vegas Air Force Base (now known as Nellis Air Force Base), giving him his first exposure to the city.

While Jackie was stationed in Las Vegas, he stayed at El Cortez, which at that time was only in its second year of operation. A friend of his introduced him to Jim Young at the Boulder Club in 1946. Soon thereafter, Jackie invested the bulk of the money he made as a bookkeeper in Nebraska into taking a 3% interest in the casino.

When he was done serving in the Army, Jackie returned to Nebraska to complete his Bachelor’s Degree in Business Administration at Creighton University. After he graduated, he worked as a bookmaker for legal gaming properties.

In the late 1940s, the government instituted a 10% gambling tax that impaired bookmaking in Nebraska, so Jackie had to pull up stakes and moved to Las Vegas with his family in 1950. A year later (in 1951), he bought an ownership interest in the Flamingo which was founded 4 years earlier by Bugsy Siegel.

Over the following years, Jackie also invested in two sportsbooks; the Saratoga and the Derby. Both of these ventures provided his family with a reasonable income from 1953 through 1959.

In 1961 Jackie purchased the Las Vegas Club, and in 1963, he bought the El Cortez outright from John Kell “J Kell” Houssels, Sr. Houssels had built the El Cortez and sold it in 1945 to gangsters Bugsy Siegal, Meyer Lansky, Gus Greenbaum, and Moe Sedway, but bought it back later when Siegel and company wanted to fund the Flamingo. When Jackie bought the hotel, he inherited the care of mobster Irish Green, who was upright with Siegel and got put up in the El Cortez for life.

Jackie opened The Western with business partner Mel Eber in 1970, where he promoted penny slots, low-limit table games and bingo. He also acquired what became the Gold Spike in 1983. He was a partner, alongside Sam Boyd and Howard Cannon, in the opening of the Union Plaza in 1971, which was renamed “Jackie Gaughan’s Plaza” in the 1990s.

Jackie owned a stake in the Golden Nugget when Steve Wynn took over the downtown property in 1973. He was a mentor to Wynn as he learned the Vegas casino industry. While casino investment and development began to shift towards The Strip and off-strip, Jackie kept his capital investment in downtown. Jackie’s downtown casino thrived even as other began to reduce costs and close. He kept his operations open and kept investing capital in his properties.

Sale of Casinos
At his peak, Jackie had accumulated more than 25% of the available real estate in downtown Las Vegas, including more than 20 acres of undeveloped land. In 2004, Jackie sold the Plaza, Gold Spike, Vegas Club, and Western, along with additional downtown real estate, to Barrick Gaming for $82 million. He sold his controlling interest in El Cortez to Kenny Epstein in 2008 but continued to maintain his residence there.

Jackie Gaughan died on March 12, 2014 at the age of 93 from pneumonia and complications of old age. He passed away less than 36 hours after being transferred from his longtime residence in the penthouse atop El Cortez to a local hospice in Las Vegas. His funeral Mass was held on March 17, 2014 at St. Viator’s Catholic Church in Paradise, Nevada.

Jackie married his high school sweetheart, Roberta Mae in 1942 and they remained married for 54 years until her death in 1996. The couple had two sons: John and Michael. John “Jackie” Gaughan Jr., had minor interests in the El Cortez and The Gold Spike. He died in his sleep in 2002 at the age of 54. Michael took over many of the daily operations of his father’s casinos over the years.

Gaughan was a civic leader who supporting numerous causes and charities. He was also a supporter of the Catholic Church and Bishop Gorman High School, from which both of his sons graduated. In 1987, Gaughan was named Humanitarian of the Year by the Clark County Chapter of the National Conference of Christians and Jews.