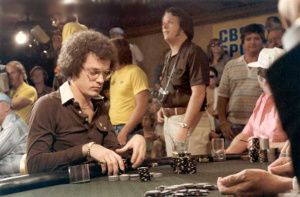 Bobby Baldwin first made a name for himself in the casino industry, when he became the youngest person to win the World Series of Poker Main Event in 1978. Since that time, he has primarily been a professional poker player and unarguably one of the greatest poker players of all time.
Bobby’s resilience and great sportsmanship has earned him the top position in poker several times and made him likable amongst his peers. In 2003, he was inducted into the Poker Hall of Fame.

Bobby Baldwin was born Robert H. Baldwin in 1950 in Tulsa, Oklahoma to an upper-class middle family. He tried his hands at poker for the first time in 1962, when he was twelve years old and lost. This didn’t deter him, it instead piqued his interest in the game. He continued to play throughout high school and became a pro among his peers. While at the Oklahoma State University, his passion for poker grew.

In 1970, Bobby and few of his gambling friends took $5,000 which they earned while playing poker on campus and went to Las Vegas. Long story short, they ended up losing all the money within a few hours after arriving.

After losing the $5,000, Bobby didn’t back down, but instead begged the casino for a $500 credit. He lost $425 out of the money given to him by the casino but still wanted to go on playing. His resilience was rewarded, as he turned the game around and won $38,000 over the next six hours. By the time he was returning home, he had won a total of $180,000.

With his new earnings, Bobby spent the majority of his college career investing most of his time and money in sports betting, with a particular interest in the NFL. He also played in different poker games, winning some and losing some, until his breakthrough came in 1978.

In 1977, Bobby’s poker career took off when he won his first two bracelets at the World Series of Poker, first winning the $10,000 Deuce to Seven Draw event, then winning the $5,000 Seven Card Stud event which took him to $124,000 total winnings that year.

Bobby won the largest tournament prize in 1978, when he won the WSOP Main Event, earning the title and the grand prize of $210,000. Professional poker players that he defeated at the final table included Ken Smith, Jesse Alto, WSOP bracelet winner Louis Hunsucker, Buck Buchanan, and businessman Crandall Addington. Bobby’s 1978 WSOP Main Event victory at the age of twenty-eight made him the youngest winner in history, a record that was eventually broken by Stu Ungar in 1980, Phil Hellmuth in 1989, Peter Eastgate in 2008, and Joe Cada in 2009.

Bobby won the $10,000 Deuce to Seven Draw event again in 1979, which earned him his fourth and most recent bracelet at the World Series of Poker. He did not stop here, as he went ahead to compete in the Super Bowl of Poker tournaments (SBOP), organized by 1972 champion, Amarillo Slim. Bobby cashed in several SBOP and won the $5,000 Seven Card Stud event in 1979.

Bobby became a consultant for the Golden Nugget Casino in 1982, and two years after, in 1984, he was named its president. In 1987, he was selected to head The Mirage. Moving up the corporate ladder, Bobby also became president of the Bellagio Hotel and Casino in 1998.

Five years later, in 2005, after the acquisition of Mandalay Resort Group by MGM Mirage, Bobby became President and CEO of the announced Project City Center, while he continued his responsibilities as the CEO of the Mirage Resorts subsidiary. He currently supervises several other resorts and properties.

In 2007, the Bellagio Casino opened “Bobby’s Room”, which is a signature high stakes only poker room established in Bobby’s honor. There is a $20,000 minimum buy-in for this room.

Bobby is not only poker player but also a world-class billiards player and an avid off-road racer. The book, Bobby Baldwin’s Winning Poker Secrets, was written by Mike Caro. Bobby has contributed to many columns on poker and he authored a section for Doyle Brunson’s Super/System. His book, Tales Out of Tulsa, a poker guide for novices, was published in 1985. In 2012, his total live tournament winnings exceeded $2,300,000. His 20 cashes at the WSOP account for $2,100,311 of those winnings.

Bobby married Audra Hendley on August 2, 2012, at their home in Southern Highland, where they presently stay.
Bobby was inducted into the Poker Hall of Fame in 2003, and he is one of the greatest poker players of all time.