Home / BetOnline, SportsBetting.ag and Wild Casino Down; When Will They Be Fixed?

Update 4/22/2018-It appears BetOnline.ag, SportsBetting.ag and Wild Casino are, yet again, down. If you want a quality site with 20+ years of history, we suggest clicking here and joining BookMaker.

In a frustrating past few weeks for sports bettors, BetOnline.ag, SportsBetting.ag and WildCasino.ag have all been down and players have been largely unable to access the sites. With March Madness beginning, the timing could not have been worse, for bettors or the site operators themselves. While Wild Casino is not a sports betting site nor does it have any sportsbook at all, it is run by the same parent company and has experienced the same issues.

The problems began over a week ago, with varied accounts as to the exact initial date. It appears that the initial issues took place around March 1st across the varied brands. Since then, the sites have intermittently appeared and then again went back offline. There have been off and on occurrences of the BetOnline site “working” to one extent or another, depending on the device being used to access the book. With that said, even players who managed to reach BOL have been unsuccessful in actually depositing funds or placing wagers.

WildCasino.ag, in our estimation, has been down entirely for the longest period. There was only a brief period where the site was live in the past few weeks, and even then there appeared to be caching issues.

An Update from BOL

Though it has been touted as “routine maintenance,” it seems clear by now that the BetOnline group of sites was the victim of a cyber attack, of one sort or another. The exact details are unclear, but it seems that a DDOS or other similar malicious attack is the underlying cause of these sites being offline. 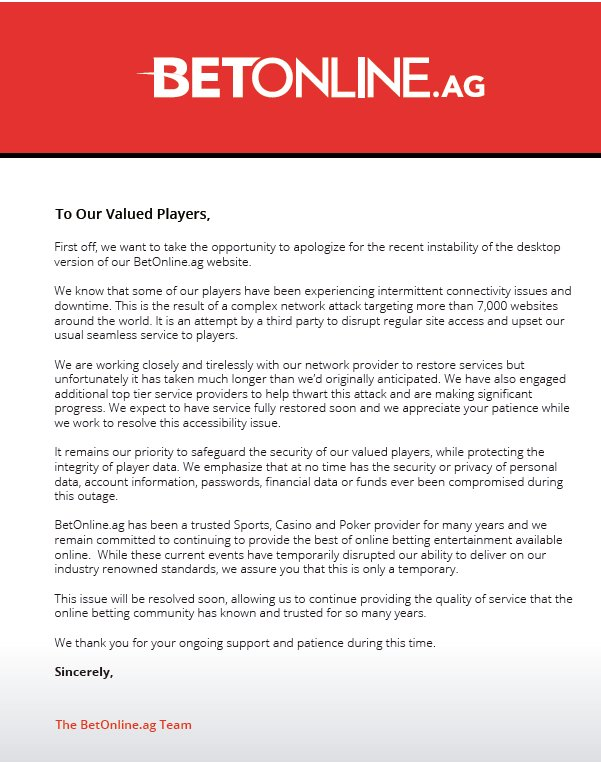 On Friday, March 9th, Dave Mason, who promotes BetOnline on Twitter, released a statement on behalf of BetOnline itself. The document served to reassure players that the issue was not from BetOnline’s operation, but instead an outside attack.

While players were appreciative of this update, many felt that it came too late and were growing frustrated. Some attributed the issues to the fact that BetOnline, SportsBetting.ag and WildCasino.ag all accept multiple cryptocurrencies for deposits and withdrawals, including Bitcoin, Dash, Ethereum and Litecoin. It is our best guess that this is untrue, but instead a simple coincidence, as BetOnline has operated as a real money site for many years prior to accepting cryptos.

Are Your Funds Safe?

Yes, we believe that your funds are safe and that this is an operational, backend issue that is plaguing the group of sites, with Bet Online getting the most general coverage due to its size and brand awareness. The sites themselves do not appear to be in any danger as it relates to user money or management issues.

When Will These Sites Be Fixed?

This is the lingering question that currently has no clear answer. Our own inquiries to support at both Bet Online and Wild Casino have not received a reply, and most users report that they have not been able to establish any contact with customer support. It goes without saying that BetOnline themselves is hurting from this just as much as anyone else, and they are working to resolve the situation as quickly as possible.

A DDOS attack, or other malware or similar attack, can be fixed in a matter of minutes, or it could require extensive work and time. We encourage players to remain calm, even though this situation is very frustrating, especially during such a popular time for sports betting.

If you would like to join another sportsbook in the meantime, we would suggest MyBookie.ag. You can read the full review from WCI here. MyBookie does accept Bitcoin as well as other standard real money forms of deposits and withdrawals, but they do not offer ETH, LTC, or other crypto banking methods.

If you have any input or receive further updates on your account at BetOnline, SportsBetting.ag, or Wild Casino, we encourage you to comment below.

2 thoughts on “BetOnline, SportsBetting.ag and Wild Casino Down; When Will They Be Fixed?”