The world’s top golfers will descend upon Augusta, Georgia from April 5th through 8th to compete in the first Major of the year, the Masters. There are a number of high-profile storylines heading into this event, but perhaps none more intriguing than Tiger Woods’. Despite seemingly falling off the professional golfing map for the better part of the last decade, Tiger Woods has been playing some of his best golf of late. The oddsmakers are giving him a good shot of winning what would be his 15th Major, but there are plenty of other golfers out there who just as easily could earn the top spot by Sunday evening.

Jim Nantz, who has called the Masters and other huge golf events for 30+ years, said that this year’s tournament is one of the most highly-anticipated Masters he has ever been a part of. A lot of this has to do with Tiger Woods, but the fact of the matter is that there are an overwhelming number of excellent golfers in the field, and we are undoubtedly in for a treat.

According to oddsmakers, Rory McIlroy is being given one of the best chances of walking away with the storied green jacket given to winners of the Masters. Rory being listed as one of the odds-on favorites is interesting when you consider that his best finish at Augusta National was 4th, which he earned all the way back in 2015. In 2016 and 2017 McIlroy finished in the top 10, but he was never all that close to earning a victory.

Despite all of that, the Northern Irish international is looking to bounce back from a 2017 that was plagued by injury, and there is no better way to do that than by putting in a solid performance in Georgia. Something else worth noting is that Rory managed to win the Arnold Palmer Invitational on March 18th, so it is clear to see that his form has returned, at least to some extent. 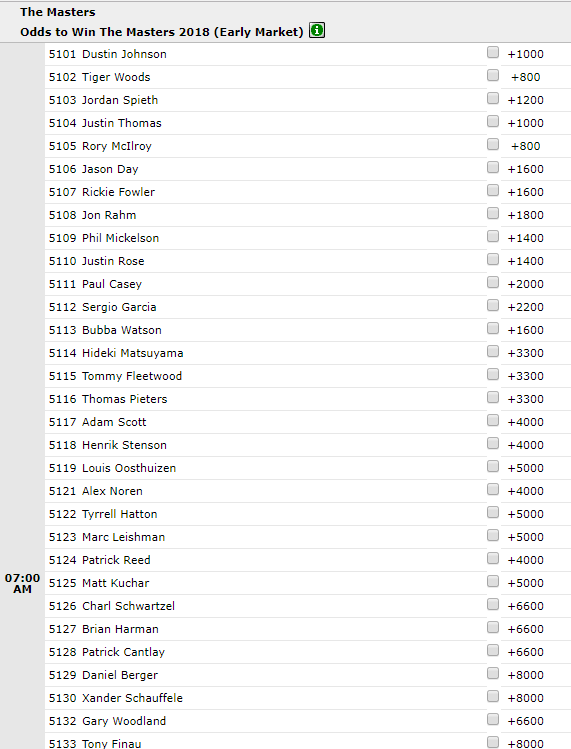 Even though he has not really been on the competitive scene for much of the last decade, Tiger Woods is being given a solid shot of winning the 2018 Masters. This is due, in part, to his recent performances since returning to the pro golf circuit, most notable of which was his 2nd place finish at the Valspar Championship which was held at the beginning of March.

Beyond what he has done thus far in 2018, however, bettors will have to go back many years to find Tiger’s last consistent string of good form. His relative inexperience in the modern golf landscape and lingering injuries may prevent people from buying in on Tiger, but he is widely considered to be the greatest golfer that has ever played, so it may be equally tough to bet against him. Though it is not a big indicator of how he will perform this year, Tiger’s last Masters victory came back in 2005.

Sergio Garcia may be in the middle of the pack as far as the oddsmakers are concerned, but he is the defending champion of this competition and cannot be counted out. Garcia was named European Tour Golfer of the Year in 2017 and accumulated a number of solid performances, so it is a bit curious to see him not being given much of a shot at this year’s Masters. Be careful with this pick, because even though Garcia won in 2017, you have to go back to 2013 to find the last time he finished better than 10th at the Masters.

Justin Thomas is being overlooked by most bettors simply because he really hasn’t ever impressed in Augusta. His best ever finish at the Masters was a 22nd place finish last year, and this alone would not necessarily be indicative of someone who, statistically, is being given a decent shot of winning. At just 24 years of age, however, Thomas is just getting start on his pro career and is liable to surprise a lot of people as he develops. What a surprise it would be if he won the green jacket come April 8th.