The NBA is arguably the most well-known and popular basketball league in the world, and its Playoffs and Championship series garner more viewers than most other global professional sporting leagues. In the United States, however, there is a brief period every year where NBA basketball plays second fiddle to NCAA—college—basketball. This period of time is referred to as March Madness and is a time of year where the nation’s top 64 (or 68 if you include play-in games) schools compete in a tournament where, eventually, a National Champion is crowned.

As you might expect, March Madness is one of the busiest times of year for sports bettors, as there are a ton of games packed into what ends up being about a 3-week span of time. To be more exact, there will be a grand total of 67 games played in the 2018 NCAA March Madness Tournament. Officially, March Madness begins on March 13th and will continue until a champion is crowned on April 2nd.

The big story entering this year’s tournament is which of the classic schools will once again realize glory. According to posted odds, historically strong basketball schools such as Michigan State (+800), Villanova (+600), and Virginia (+600) are all amongst the most likely winners. With that said, there always seems to be a dark horse or two, and for that role we look to teams such as Xavier (+2000) and Miami (+10000), to name a few.

Though they aren’t the odds-on favorite to lift the championship trophy, Michigan State are being taken very seriously by the oddsmakers. Sparty has accrued just 4 losses throughout the whole of this season, and even an early exit from the Big Ten conference tournament will not stop their momentum. Under the watchful eye of Tom Izzo, the Spartans will be hoping to make a return trip to the National Championship for the first time since 2009, and will further hope to lift the crown for the first time since 2000. 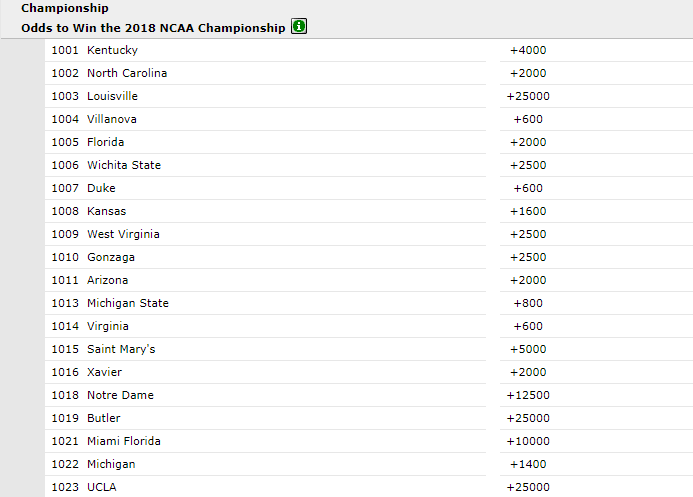 Like Michigan State, Villanova boasts an absolute legend as a head coach. Jay Wright has been in charge of the Wildcats since 2001 and has very recently lifted the championship trophy, in 2016. Villanova has just 4 losses to their name, but in those losses shows a susceptibility to succumb to weaker opponents. Not only were none of the 4 teams they lost to ranked, Nova allowed more than 75 points to be scored each time. Something to note is that while Villanova has the nation’s best scoring offense (87.2 PPG(, they also have one of the nation’s leakiest defenses, allowing nearly 72 points per game (144th in NCAA).

Unlike Villanova, Virginia has gotten to be one of the favorites this year thanks to stout defense. Allowing just 52.8 PPG, the Cavaliers lay claim to the most effective defensive unit in the nation. This is not atypical for Virginia, as they have historically looked to defense first. With only 2 losses on the season, Virginia has proven that they can hang with and defeat the best, but it will be interesting to see how their team fares on the biggest of stages this March.

The glory of March Madness is that there are literally thousands of different bets you can make. The sheer number of games alone means that a bettor will always be occupied, but the intense coverage means that you can bet on far more than solely moneylines, spreads, and over/unders. Having said that, all 67+ games in this year’s March Madness will feature the standard three betting options.

Another massively popular bet type is futures betting. Apart from picking the outright winner of the tournament as a whole, bettors can also place wagers on just how far exactly they think certain teams will make it. So, for example, even if you don’t think Michigan (+1400) will win the National Championship, you can place a futures bet on them to make it to the Elite 8 or even the Final 4. The same goes for just about any of the teams in the field of 68. You can also place futures wagers relating to an individual player’s performance in the tournament. An example of this would be placing a bet on the player who will finish the tournament with the most points scored.

For many people, prop betting really takes the cake when it comes to wagering on March Madness. The exact types of prop bets will vary at different sportsbooks, but they range from the team to win the tip-off of a particular game, to the first team to cross the 10-point threshold, to the first team to commit 7 fouls in a half, and so many more. Much like how it is with the Super Bowl, March Madness is a time of year where some of the most unique prop bets surface. It is important to remember that prop bets are extremely difficult to predict with any sort of accuracy, but they do well to make games a good bit more interesting than they might otherwise be.

Segment betting is yet another type of wager that seems to gain a lot of popularity around this type of year. When we say segment betting, we are talking about wagers that are applicable to certain parts of the game, such as the first or second half. With these types of wagers, you will see standard betting options such as moneylines, spreads, and over/unders, but rather than them applying to the entire 40-minute game, they will apply to only one half. In fact, some March Madness segment betting can be broken down into quarters such that a wager may apply only to the first ten minutes of a game.

Last but not least, there is live betting on March Madness. Live betting is popular at all times of the year, but during March Madness you will find that every game played will also be listed as a live betting option. What’s more, the number of bets featured will be greater than you have probably ever seen before. Thanks to the massive popularity of March Madness, bookmakers are trying to be on the receiving end of as many bets as humanly possible. As such, it only follows that there is a huge number of individual propositions even for games that feature what can best be described as obscure, unpopular schools.