The 144th running of the Kentucky Derby will take place this Saturday, May 5th, at Churchill Downs and there are plenty of horses being given good chances of emerging victorious. Compared to other years, the 2018 Kentucky Derby features a field that is even, without a clear-cut favorite. The only horse who seems to be breaking away from the pack as far as the odds go is Justify, and there are as many questions about this horse as there is hype surrounding him.

Justify is a three year old colt whose father was a horse by the name of Scat-Daddy. Scat-Daddy may have never won a Kentucky Derby, but he earned nearly $1.5 million during the early 2000s. Justify has performed well so far this year, winning his only three races. That may be a good sign, but history shows that lightly-raced two year old horses fare poorly in the Derby as a three year old.

In fact, out of 143 races run so far, 136 have been won by horses who were heavily raced as two year olds. Historical odds are up against him, but Justify is the oddsmaker’s favorite to win the 2018 Kentucky Derby.

Mendelssohn is being likened to a professional sports team that enters the post-season on a hot streak. The horse just recently won the prestigious UAE Derby, which was also the last major race before the Derby.

Even more impressive than his UAE win, however, was the margin of victory; a whopping 18.5 lengths. Despite the impressive Middle East finish, UAE Derby winners have historically performed poorly at the Kentucky Derby. 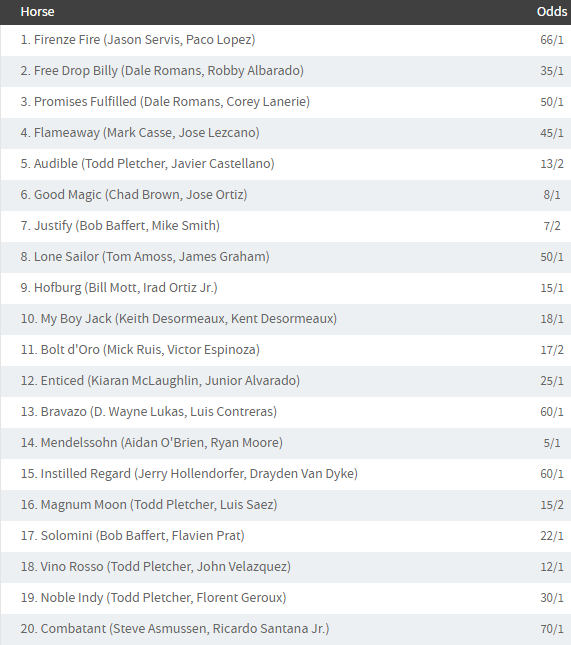 Magnum Moon has only run in four career races, so his track record is less than extensive. What Magnum Moon lacks in experience, he makes up for in wins, having won all four of the races he has entered. There are some complaints from a technical point of view, but the horse has a solid jockey in John Velazquez and a renowned owner in Todd Pletcher. This Arkansas Derby winner may not be the oddsmaker’s favorite horse, but there are plenty of reasons to believe that he might finish at or near the front of the pack on Saturday.

Solomini’s fate in the Kentucky Derby will be decided in the early stages of the race, according to his running history. This horse is not necessarily known for his breakneck speed, but he can bump around with the best of them and can best other horses with brute force and finesse. If he does not get a good jump and surge to the front of the pack right away, that might spell doom.

On the other hand, if Solomini can make a break straight from the gates, he has just as good a chance as any other horse of finishing at the front of the pack. With 22/1 odds, this horse is definitely worth taking a chance on. Even if you do not pick him to win, a top three finish is not far-fetched by any stretch.

Betting Odds for the Kentucky Derby at Churchill Downs